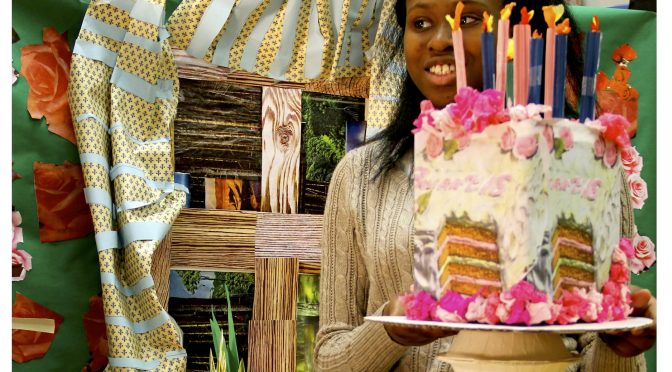 For over ten years I’ve had the pleasure of partnering with Amie Robinson, the art teacher at PS77 in Brooklyn New York and her students as part of The Museum of Modern Art’s Community and Access education team. (PS77 is a public school in Brooklyn NY for middle and high school aged students diagnosed on the autism spectrum.)

Though every single year we have partnered has been a revelation, I’d like to highlight 2015:

For this seven week program we focused on two exhibitions about artists who use their studio space as an integral part of their art-making practice- their studios become the ground for a kind of “world” they create and inhabit. In particular we focused on Matisse’s cut-paper collages which filled the walls of his home in Nice, and the work of a contemporary artist Daniel Gordon, who makes life size, three dimensional collages out of found images.

A number of things happened as a result of our encounters at MoMA: the students were now familiar with the idea of a kind of “manipulated” reality- they had explored images that transform everyday objects into something surreal and expressive, there was a spirit of play and experimentation in the air rooted in something familiar, personal and communal. Back at the school we collectively decided to build a life size, three dimensional kitchen still life from found images:

Search for projects by theme

Network for Accessibility in Arts and Culture

This message is only visible to admins.

Error: An access token is required to request this resource.
Type: OAuthException
Solution: See here for how to solve this error